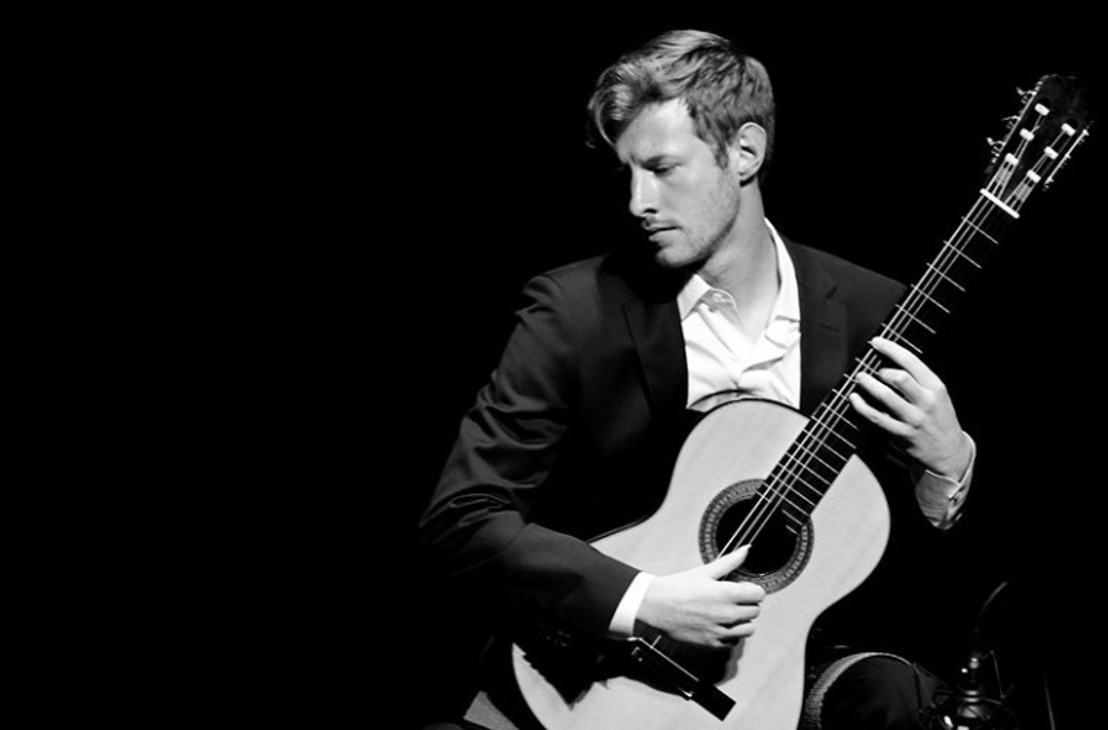 May 20, 2020, Fort Wayne, IN – With his debut recording Albéniz: España, Suite Española No. I, guitarist Alec Holcomb sought to capture the entirety of Isaac Albeniz’s beloved Spanish themed suites in a way that they had never been heard before – freshly transcribed in full and performed on solo classical guitar. Taking years to transcribe to his satisfaction, he knew that he needed a studio experience that would match the level of effort and perfectionism that he had brought to his work thus far. In order to capture the diversity and beauty of the music with a sound that would satisfyingly fill out the entire piece as well as the nuances of his dynamic playing style, Holcomb recorded the album at Sweetwater Studios in Fort Wayne, Indiana with Sweetwater Studios Producer/Engineer Dave Martin.

‘Spanish Postcard Music’
​Holcomb has already become known in classical performance circles as a dynamic player with a taste for technically challenging pieces. Although sections of Albéniz’ España and Suite Española No. I, had been performed by guitarists in the past, it had been decades since anyone transcribed the entire suites – originally written for piano – and released a recording. “I wanted to share what the guitar is capable of when compared to more traditional performance styles that it may be known for,” he said. “It’s also very pretty music, like postcards from the various regions in Spain, which many of the pieces are named after. I thought it was a way to perform something that would be challenging and exciting for me while still being something that people would enjoy listening to.”

Having had previously unsatisfying studio experiences, Holcomb took some time in deciding where to make his first official recording. He ultimately chose Sweetwater Studios after visiting the campus in Fort Wayne and bonding with Martin, something that gave him confidence in both the location and its people. “The sheer amount of experience and equipment at the studio was readily apparent,” he said. “I was surprised to know that a studio of this caliber was relatively close to me. The friendly, professional atmosphere helped me rest easy, knowing that this was the place where I could get the sound that I was after.”

Pure and clean
​For Martin, a veteran musician with decades of experience both on the stage and in the studio, it was important to home in on the right vibe for the project and capture Holcomb in the moment as a performer. In order to do that he knew that he needed to create a guitar sound that could paint a full picture. “He’s an amazingly talented guitarist and I knew from the get-go that this project would hinge on my ability to capture the nuances of his technique,” he said. “Alec told me that his previous studio experiences hadn’t been satisfying because he wasn’t getting the kind of guitar sound that he wanted. I knew going into it that getting that right on Day One would help us to capture the kind of seamless performances that we were looking for.”

Holcomb also noted how difficult it can be to record the classical guitar given the instrument’s inherent nature of being soft and delicate sounding. Fortunately, Sweetwater Studios’ Russ Berger-designed Studio A was up to the task of being silent with the doors closed without being lifeless. “These rooms were designed to be really quiet, and that was a necessity for what I was trying to do,” he said. “I could play very delicately and still hear everything without picking up any extraneous noise.”

Holcomb told Martin that he was looking for a sound with a strong low-end, something somewhat uncommon in recording classical guitar. A fan of unconventional solutions, Martin adapted an approach that he’d often used for recording the double bass. He miked Holcomb’s guitar with a spaced pair of DPA 4011 microphones as well as a Telefunken U47 and a Shure 353. The microphones were then run through a pair of Rubert Neve preamps and recorded without any outboard EQ or compression. “It seemed like a weird idea at first, but once Alec started hearing it and smiling, I knew that we’d found our sound,” said Martin. “Ultimately we didn’t need to use a lot of effects because the magic would be all in the playing.”

A Seamless Performance
​With the sounds and environment in place, it was down to Holcomb to perform his difficult arrangements in marathon sessions that would test his ability both as a player and as an editor of his own work, as he would ultimately sift through the sections himself to choose the final performances. Martin for his part couldn’t help but be impressed by the quality of technique he was witnessing. “I had the privilege of listening to a really talented musician play some incredibly challenging material,” he said. “Not only that, but he knew how to edit the material down to capture his best performances. By the end we knew we had something that was a completely seamless piece of music.”

“Ultimately doing this was a challenge to myself,” said Holcomb. “I wanted to see if I could capture my ideal sound. I really felt like I was able to do that here, and working with Dave and the staff of Sweetwater Studios really gave me what I was looking for.”

About Sweetwater Studios
​Sweetwater Studios is a wholly owned subsidiary of Sweetwater Sound, Inc., the largest online music instrument retailer in the country. With three world-class studios designed by Russ Berger and access to a greater diversity of musical equipment and professional audio gear than any other recording studio in the world, Sweetwater Studios is able to accommodate just about any recording, mixing or mastering project, no matter how simple or complex. Sweetwater Studios also has an exceptional staff of producers, engineers, session musicians and studio technicians to ensure that any artist will get personalized, first-class treatment from start to finish.